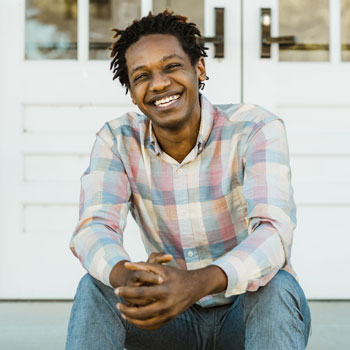 Tenor, scholar, cultural activist, and pedagogue Marquese Carter (they/them/their) has distinguished themself as a force for change in the world of classical music. Their work whether in written scholarship or in the performing arts has centered composers from marginalized populations, particularly black womxn composers. Carter’s work as an American teaching artist seeks to decolonize the lens through which music is understood and appreciated in contemporary culture. Dr. Carter’s research on the art songs of Florence Price has been featured in numerous forums including the Society for American Music conference and the New York Times. Archival research for their dissertation The Poet and Her Songs: Analyzing the Art Songs of Florence B. Price was generously funded by the American Musicological Society Thomas Hampson Fund grant for song research.. Frequently sought after as an authority on decolonizing frameworks for the academy, Carter has appeared in workshops and panel discussions ranging from the University of Michigan’s African American Music Symposium, to the University of Utah’s two-day summit on music and social justice. Carter serves as president of the International Florence Price Festival, where they curated and administered the first Virtual Florence Price Festival in 2020. Dr. Carter seeks to create spaces that center black womxn in an effort to re-canonize the hidden figures of music - past and present.

An active singer and writer, Carter has performed works ranging from Bach cantatas to new music premieres throughout the U.S. They recently made their debut as a librettist with the Queer In(n) Project, where they collaborated with composer Matthew Recio to write an opera scene about transgender icon "Mama" Gloria Allen. Comfortable as an actor, Carter portrayed singer Sam Lucas in a documentary hosted by Sandra Graham and American Music TV in Brooklyn, New York. They have performed guest lecture recitals centering on African American music at the University of the South, Sam Houston State University, and the University of Maryland-College Park. Carter served as a Stern Fellow at Songfest, and sang with Kentucky Opera’s Educational Outreach Company in 2018. As a choral artist, they sang with Westminster Symphonic Choir at Carnegie Hall, Lincoln Center, and the Kimmel Center, as well as with Apollo’s Voice (Bloomington, IN) professional chorus for two seasons. Marquese performed in multiple premieres of new vocal works including New Voices Opera’s production of Melody Eotvos’s The King in Yellow in 2015. They look forward to commissioning new art songs centering the black queer experience in 2021.

Dr. Carter is passionate about functional voice pedagogy in all musical styles. Carter’s students have been finalists in the Southeast Regional, Mid-South Regional, Georgia Chapter, and Kentucky Chapter NATS auditions. Carter joined the music faculty of Murray State University in 2020, where they teach voice and music history. Before their current appointment, they served on the faculties of Indiana State University and Georgia Southern University. Carter currently serves as a member of the NATS National Mentoring Initiatives Committee and as a member-at-large with the Kentucky NATS Executive Committee. Carter was honored to be chosen from a national search to serve as a 2019 NATS Intern teaching fellow at the New England Conservatory. There, they studied musical theatre pedagogy under renowned pedagogue Kevin Wilson. Dr. Carter continues their education as a pedagogue, including earning their 200-hour Hatha yoga teacher certification and participation in NATS, PAVA, and the Society for American Music. In their free time, Marquese enjoys knitting, reading poetry, practicing yoga, concocting home remedies, and singing along to Gospel music tracks in their front room.