Celebrating the History of Desegregation at Murray State University 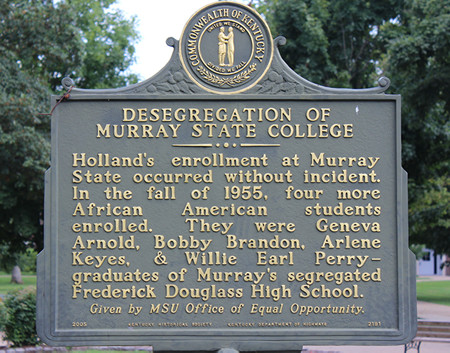 The first African-American student was Mary Ford Holland in 1955. Holland enrolled at the age of 48.  She graduated in August 1961, earning her Bachelor of Science. She retired from teaching in 1972.

The first African-American graduate, Nancy Tyler Demartra graduated on May 29, 1961 with a bachelor's in elementary education, and later earned a master's in education in 1963.

The first African-American varsity athlete was Dennis Jackson in 1960. Jackson competed in football as well as track & field and was named a member of the All-OVC football team in 1964. He has worked as a sports official, teacher and coach, while receiving numerous honors such as induction into the Kentucky High School Athletic Hall of Fame in 1999.

The first black person to serve as a full time faculty member was Ernest Brooks. According to the Board of Regents minutes from the March 30, 1970 meeting, Brooks was hired at Murray State as an Assistant Professor in the Guidance and Counseling department.

Hopkins County native Jerry Sue Pritchett Owens Thornton, 1969, became the first black graduate student to teach at the university. She was also the first Miss MSU. Thornton was a first-generation college student who earned her bachelor's and master's degrees from Murray State before earning her doctorate from the University of Texas at Austin.

Phillip DuVentre  was the first black Homecoming King in 2007. The title of Homecoming King was established in 2001. DuVentre received his bachelor's degree at Murray State, earned his master's degree in higher education administration from Florida International University.

The Zeta Omicron Chapter of Alpha Phi Alpha Fraternity, Inc. was chartered on January 11, 1969 at Murray State. The Murray State Zeta Omicron Chapter of Alpha Phi Alpha Fraternity hosts the Miss Black and Gold Scholarship Pageant annually as a part of Homecoming festivities. The name of the pageant, Miss Black and Gold, is derived from the colors of the fraternity, and has been an annual event of the fraternity since the first pageant in 1976 in New York City at the Alpha Phi Alpha Convention.