Celebrating Our Past, Embracing the Future

Discover the history, celebrate event information, and learn about the impact of black students, faculty, and staff on the Murray State University campus.

What is it? Juneteenth is the day the Emancipation Proclamation was officially enforced, ending enslavement in Texas and effectively the entire United States. BLKFREEDOM.org will air an original video presentation at Noon on Friday, June 19th.

The legacy of Juneteenth shows the value of deep hope and urgent organizing in uncertain times.

Kentucky African American Encyclopedia Information about black life and culture in the Commonwealth of Kentucky. 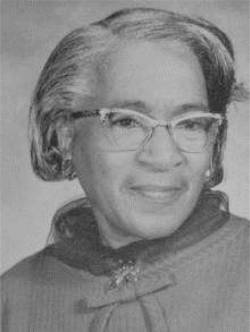 When the late Mary Ford Holland enrolled at Murray State College in the summer of 1955, she was a nontraditional student in more ways than one.

Not only was she 48 years old, but she was the first black student on campus. "She was recruited by MurrayState College to continue her education there," said Holland's niece, Elnora Ford of Westland, Mich. "She was asked to enter quietly. She was a modest woman, anyway, and a small woman in stature, so she did."

Murray State University is using several activities this year to celebrate the 50th anniversary of the first black students on campus. Ford will be in Murray to share her aunt's story in a lecture set for 5 p.m. March 31 in the Alexander Hall Atrium. Then at homecoming in October, a historical marker commemorating the milestone will be unveiled on campus.

Holland died in 1999 at age 92 at Hilltop Nursing Home in Kuttawa. She and her husband, Charles Edward Holland, who died in 1987, had no children.

Holland was born in 1907 in Trigg County. "My grandmother home-schooled all the family," Ford said. "She had to, there were no schools for blacks. Aunt Mary did not attend public school until she qualified to be in the fourth grade. They moved to Eddyville then."

Ford's father, the late Charles Ford, moved to Michigan in 1926 and sent money home so his eight sisters could attend school. "It was a family affair," Ford said. "I had three aunts to go to college. At that time it was difficult for anyone, besides being a poor black family."

Holland graduated from a boarding school in Paducah and then attended West Kentucky Industrial School."She got her first teaching certificate in 1933 from West Kentucky, but she didn't graduate until 1935," Ford said. "That was standard practice back then. She had been teaching since 1933 in one-room schools, mostly in Lyon County. She started school at Kentucky State University (in Frankfort) in 1941. She took correspondence courses and went to Frankfort in the summer. She was going part time, trying to earn her bachelor of science."

In 1955, Murray State accepted about 70 credit hours Holland had earned at the two other schools, according to Dr. Joan Niffenegger, co-chairwoman of the Murray State College of Education Multicultural Education Committee, the sponsor of Ford's lecture.

"That summer she was escorted by the police and the president for her safety," Niffenegger said.

There is no record of the kind of riots or protests that took place at other Southern universities when black students entered for the first time, according to Annazette Fields, director of the Murray State Office of Equal Opportunity. "That speaks for itself," Fields said. "When you think of desegregation at Murray State University, it took us a while to identify (Holland). It happened without incident."

Ford said Murray State found her only because she still receives her aunt's alumni magazine. Ford said Holland told her she was called a racial slur only once. "She said, ‘I wasn't too discriminated against,’” Ford said. "She didn't seem to be worried. She always said she took the Lord with her wherever she went.

"She was a very modest person. I was very active in the civil rights movement, and she had a fit. I met Martin Luther King and Medgar Evers, but she was modest talking about racial things. She wouldn't discuss it in detail."

Ford, retired administrative assistant to the provost at the University of Michigan-Dearborn, said she thinks of her aunt's accomplishments often.

"At the University of Michigan, I co-founded a program to help retired people go back to school. I thought about her frequently as we developed our program. She was determined. She wanted her degree. She earned it, and she was very proud of it."

Holland continued teaching while attending school, and graduated in 1961.

"She was a trailblazer at Murray State, but she had to go back into a segregated environment to teach," Ford said. "She didn't teach at a desegregated school until the mid-1960s."

Holland ended her career as a reading specialist at Lyon County Elementary School. She retired in 1972. She remained an active member of the Retired Teachers' Association and the Republican Women's Club. She was a 75-year member of Locust Grove Baptist Church.

Holland received a key to the city of Eddyville in 1998. "She refused to come to Michigan with me," Ford said. "She said, ‘I was born in Kentucky, and I will die in Kentucky.’”

This year marks the 60th anniversary of integration on Murray State's campus and it is important because it shows how far the university has come since the 1950s. It recognizes the struggle, perseverance and courage of students like Nancy Tyler Demartra, Mary Ford Holland, Vador Perry Warfield, Harvey Langford, Illah Perry Grant and many others.

The Graves County native graduated in 1961 with her bachelors of arts in elementary education and a masters of arts in education 1963. Demartra said the reunion was an important part of Murray State's history, she thought the 60 year events and reunion was needed. The events should be widely publicized and attended. It’s important to celebrate and should be widely promoted and attended.

“Dean Sparks was an excellent person,” Demartra said. “If there were any problems he always had an open door. I had permission to take graduate courses while I was an undergraduate student. In my senior year I earned 30 hours necessary to receive a masters degree. When one of the professors found out that I would receive a 2 degrees at the same commencement, he gave me a C although I had been earning mostly A’s and B’s. This prevented me from receiving the masters in 1961, however, I returned and earned my masters in 1963. It happened so close to the end of graduation I didn’t tell Dean Sparks, although, looking back I’m sure he would have taken care of it.”

Not only did Demartra excel in her studies, she also worked part-time to pay for college. Demartra rode the bus from Hickory, Kentucky to Mayfield every morning to work from 6:30 a.m. - 7:22 a.m. Then she took the bus from Mayfield to Murray for classes. After finishing up a long day of classes, Demartra returned to Mayfield to work afternoons and evenings.

Teaching in Paducah for three years following graduation, Demartra returned to Murray State to retake the class and obtained her masters of arts. Demartra credited much of her success as a teacher to the excellent education and preparation she received at Murray State.

“I think the greatest experience, I’ve worked my whole career with children who are economically poor,” Demartra said. “To see a lot of them end up being teachers that was the most rewarding thing.”

In addition to her work as a teacher, Demartra has been a civil rights activist. The Kentucky Commission on Human Rights inducted Demartra into their Hall of Fame in 2010. Some of Demartra’s inspirations include Dorothy Height, Maya Angelou, Shirley Chisholm, Barbara Jordan and Mary Ann Edelman.

“I felt great, I felt a lot of emotions, I’ve done a lot of things in my life and I haven’t done them for accolades or anything,” Demartra said. “My greatest accomplishment has been being able to help economically poor children to change their economic situation.”

Her mother was an inspiration teaching Demartra to always strive to be excellent and encouraged her to continue thinking about things differently.

A group of six college students walked from Murray State University across the street to a small restaurant, about to quietly protest its “white-only” policy. Entering the establishment, the five white boys from New York ordered meals for the group. When the food was ready, Nancy Tyler Demartra, the first African American to attend Murray State full-time and eventually graduate, stood up to pay. When the cashiers refused her money, the entire group said “no, thanks,” and walked out. It took about three months of visits like these, but with the help of others on campus the group finally pushed the restaurant to adopt an “open” serving policy. That was 1961. Fifty-four years later, Nancy speaks with Kate on Sounds Good about her experiences at Murray State and her accomplishments in the Human and Civil Rights arenas.

Listen to the interview

Elected to the Kentucky Commission on Human Rights Hall of Fame in 2010, Nancy says that despite all the trials she’s been through, her life hasn’t been necessarily tough.

“I come from a family that believes in challenging things that are wrong,” Nancy said. “A family that works on righting wrongs.”

At ten years old, Nancy’s grandfather brought her along with him as he decided to go vote, without paying the poll tax he was historically forced to pay.

“I was in the back seat,” she laughs, “with his 44-gage shotgun. When we got there, the people told him that they were not going to charge poll taxes anymore.”

Nancy’s father was a clay-miner, her mother a teacher who believed in the power of education. Not attending college was not an option for Nancy. She took graduate courses simultaneously with her undergraduate program, attending four full years, including summers. Her senior year she was 21 years-old and set to graduate with both Bachelor’s and Master’s degrees. Until one of her professors found out.

While Nancy had been making all A’s and B’s in this particular course, the professor told her that he “received his Master’s at 26 and she was too young to be receiving hers at 21.” He gave her a C as her final grade, preventing her from obtaining the two degrees at once. The next semester, however, Nancy re-enrolled in two courses and received her Master’s degree despite the hurdles.

After graduation, she taught in Paducah for three years and then in Louisville until 1975 when the school district merged with Jefferson County. She remained a teacher in the Jefferson County school system until her retirement.

Nancy has always been involved in the Human and Civil Rights movements in some form. In the wake of the recent church shootings in South Carolina, Nancy believes that the movements are needed just as much now as they have been in the past.

“We have a lot of people who hate, and we’ve always had people who hate,” Nancy said. “And we live in a system where people who do wrong have been protected, and definitely folks who have done wrong to African Americans, Indians and immigrants.”

In moving forward, Nancy believes there are many things the Human and Civil Rights groups must tackle. She sees the recently emerging Black Lives Matter movement as essential to furthering awareness.

“I believe that the Black Lives Matter movement is important because there has constantly been times when our lives have not been considered important, in the courts, in the streets and everywhere else,” she said. “I think these people will bring some bearing upon what needs to change.”