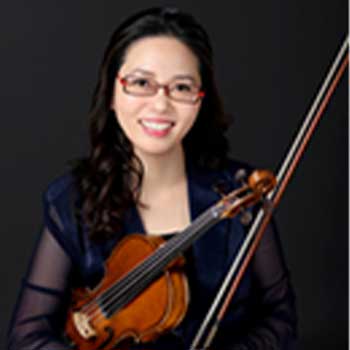 Violinist Sue-Jean Park began her studies on the violin with her mother. She attended Seoul National University, Yale University where she studied with the legendary violinist, Erick Friedman, and the University of Texas at Austin under the instruction of Professor Vincent Frittelli. All three degrees were completed under generous scholarships. Her doctoral degree dissertation was The Concept of Fantasie in Two Versions of The Carmen Fantasie: Sarasate and Waxman under Dr.Elliott Antokoletz. She also received instruction in chamber music from the Tokyo String Quartet, Miro Quartet and Peter Frankl. In addition Dr. Park has participated in masterclasses from artists such Leon Fleisher, James Buswell and the Guarneri Quartet.

Dr. Park is currently concertmaster of Paducah Symphony, Paducah, KY. She previously served in that capacity for orchestras such as the Jackson Symphony, Jackson, TN, the Jeunesses Musicales World Orchestra (UNESCO Artist for Peace), Seoul Youth Philharmonic Orchestra, Seoul National University Symphony, The University of Texas at Austin Symphony Orchestra and the Washington Korean Symphony at Kennedy Center. As an orchestral musician, Ms. Park performed in Carnegie Hall, Berlin Philharmonic Hall, Holland (Concertgebow Hall), Switzerland (Verbier Festival), Korea, Japan, Taiwan, Israel and the Philippines under the baton of Sir Neville Mariner and Kurt Mazur. She also was the associate concertmaster of the Rome Festival Orchestra in Italy and Lindenbaum Festival Orchestra in Korea under the baton of Charles Dutoit, a principal violin of Yale Philharmonia, Pacific Music Festival Orchestra in Japan and the Victoria Symphony, TX. In addition Dr. Park held positions as a tenured member of the Austin Symphony and the Austin Lyric Opera Orchestra, TX. She also served as assistant concertmaster of the Southern Illinois Music Festival and a member of the Ars Nova Chamber Orchestra in Washington D.C.

As a concerto soloist, Ms. Park played with the Jeunesses Musicales World Orchestra, Seoul Youth Philharmonic Orchestra, Paducah Symphony, Washington Sinfonietta, Germantown Symphony and the Jackson Symphony Orchestra where she appears as a soloist frequently. As a solo recitalist, she has performed recitals in Germany, Korea and several states including the Washington D.C. area. Also, as part of her commitment to being an active faculty/artist, she performs a solo recital every semester at Murray State University. She has won competitions both in the US and Korea in both solo and chamber music categories. Her recent accomplishments include a CD featuring the Franck and Faure Violin Sonatas.

Besides a performer, Dr. Park is a dedicated educator and adjudicator and is serving as Associate Professor of Violin and Viola at Murray State University. She has also held teaching positions at the Camp Encore/Coda in Maine, the Blue Lake Fine Arts Camp in Michigan, the Jackson Youth Orchestra summer camp and the Armstrong Community Music School in Austin, TX. She is in demand as a master teacher and has been invited to give masterclasses at the Levine School of Music, Austin Peay State University, Southeast Missouri State University, Western Kentucky University, Foothills Suzuki Institute in Seattle and Yale Academy in Korea. Her article “Smart Practice” was the featured article in the Kentucky Music Educators Association’s official publication.