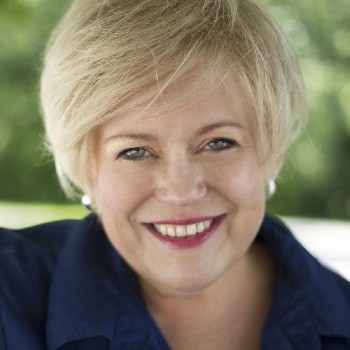 Elizabeth Huling graduated with a Bachelor of Music in Vocal Performance from Carson Newman University where she studied with Ann Jones and Dr. Thomas Teague. Soon after graduation she was awarded a fellow position at Tanglewood and studied with Phyllis Curtin and was coached by John Oliver. A highlight of this experience was a master class with Dietrich Fischer-Dieskau and performing under the baton of Seiji Ozawa. Her graduate studies began at Southern Baptist Theological Seminary. There she studied voice and pedagogy with Dr. Jay Wilkey, a former student of the famous pedagogue William Vennard. These studies continued at the University of Louisville where she studied voice with Edith Tidwell Davis. During those two years Elizabeth was often cast in the sympatico mezzo roles with soprano Edith at Kentucky Opera. “I learned what is required to produce compelling operatic singing and vulnerable honest acting in every Verdi opera we sang together! Each performance was a Master Class!”

Her graduate studies were interrupted by the opportunity to sing roles in many regional companies and her summer at Chautauqua Opera was pivotal in getting her to New York and on to the professional stage. “Cliff Jackson was my vocal coach that summer and he introduced me to conductors, directors, and agents. By the end of that summer I had an agent and several contracts for the upcoming season.” Elizabeth’s New York debut was at Carnegie Hall singing Mozart’s Regina Coeli. Her focus was primarily opera and classical repertoire for ten plus years and then her career took a remarkable turn.

While serving as a teaching artist at Vanderbilt University’s Blair School of Music she dropped in on auditions for Tennessee Rep. Soon she found herself cast as Christmas Present in Christmas Carol, performing in the Roy Acuff Theater at OpryLand, and a new member of the Actor’s Equity Union. That union card was her ticket to audition for Broadway productions. Once home in New York, she soon became a member of the Professional Musical Theater Workshop at Manhattan School of Music where She was trained by Paul Gemignani, Stephen Sondheim, Hal Prince, Joanna Merlin, and Carolann Page - who has remained a valuable and trusted mentor, given her cross over career path. Soon Elizabeth was operating between the two different genres.

Her off Broadway debut was with The New York Gilbert and Sullivan Players and her Broadway debut followed in “Phantom of the Opera”. After retiring from a rewarding career as a performer, Elizabeth founded Emerging Artists Group – a studio program for young actors and singers of all genres of vocal music. Many of her former students are performing and working on Broadway, The Metropolitan Opera, regional opera and theater companies, and film and television. Others are dedicated educators and now teach in universities, performing arts schools, and fine arts programs at all levels. Elizabeth Huling’s students have gone on to attend Murray State University, University of Kentucky, and etc. Elizabeth has directed and musical directed over thirty musicals and plays. She dreams of directing films and performing Shakespeare in the form of a play – not an opera.

Elizabeth discovered Murray State University when asked to teach at Vocal Arts Camp in 2018. “It felt like home away from home and the students were talented and hungry to learn! I am pleased to be part of this endeavor and am now grateful to be part of another new endeavor – a degree program in Musical Theater!”