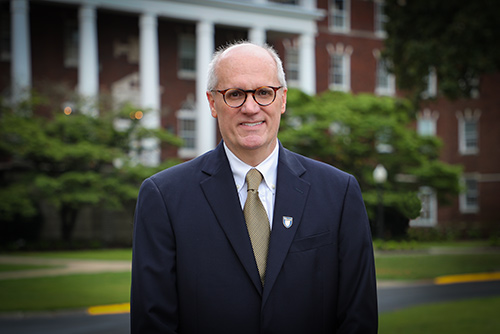 Under his leadership, some of the largest gifts in the University’s history have been received from generous alumni and friends. On October 29, 2022, Jackson announced a new, $100 million capital campaign during the  Centennial Gala, Be Bold: Forever Blue and Gold as we advance the University in our second century.

President Jackson serves as the Chair of the Council of University Presidents for the Kentucky Council on Postsecondary Education. He served as the Director of a major fundraising campaign, Hold Thy Banner High: The Campaign for the Students of Murray State University, which raised more than $71.7 million from over 23,000 distinct donors, exceeding the original goal of $60 million. Also, Jackson served the Commonwealth of Kentucky as a State Senator and served in Senate Leadership among other positions in government. He has worked successfully on many state and federal governmental projects and has been recognized for his public service. In addition, he has worked in corporate finance and as a senior executive in investment banking.

Jackson has served as President of the Murray State University Alumni Association Board of Governors. He was selected as a Kentucky Leader for the New Century (40 state leaders under 40) and as a national Toll Fellow by the Council of State Governments. He has been recognized by his Alma Mater with the distinguished Golden Horseshoe Award, the highest honor bestowed upon its alumni for service to the University. LaRue County High School (KY) recognized him as a Distinguished Alumnus in 2010.

He is married to the former Karen Miller, a MSU alumna and Registered Nurse; they are the parents of two children, Nolan and Mariel.

A Conversation on Philanthropy and Giving at Murray State University with President, Dr. Bob Jackson